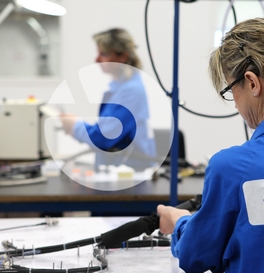 At the heart of its growth strategy, human resources are focusing on the skills and expertise of the teams. In this context, the AECE group is looking for candidates in its structures.

Send us your CV specifying the reference, to the following e-mail address: contact@aquitaine-electronique.fr

At Aquitaine Electronique, a smooth recovery…and some question marks

At Aquitaine Electronique, a first-order aeronautical subcontractor based in Serres-Castet, the matter was handled gently. The end of the containment, on Monday morning, was therefore not suffered when some forty employees came to get back to work. After the introduction of teleworking for half of the workforce in mid-March, “there was then a partial resumption of production at the beginning of April, on a voluntary basis, while of course respecting the barrier measures”, explains Caroline Mureau, Head of Human Resources. The adaptation has so far “been done gently, in stages”, with the aim of returning to the initial situation by the beginning of June.« That people feel good » Reflex sheets, validated by everyone, for people to feel good”, says the boss, Christian Houel, anxious “to create automatisms” and to show “that it is possible to work again”. The imperative is all the more vital that, in his view, “there is nothing ad hoc about this”.

As a result, and in the absence of any orders “for two months”, his concern is not feigned. And the question marks over the future are “numerous”, even if, in his opinion, “the State has done a good job in adopting measures that are both unprecedented and exceptional”. But, from now on, “it’s up to us to adapt, and without giving up… because, in any case, we don’t have the means! “says Christian Houel. Concrete example: “We will slow down some things, but certainly not research and development, because there too we have no choice”. On its own scale, Aquitaine Electronique has created a consequent design office, where no less than fifty people work. On Monday, they were all still teleworking.

In the longer term, this economic operator, whose customer base is fortunately diversified, but who does not rule out a drop of around 10% in his annual turnover, expects to “face a dip of at least one year”, or even 18 months for this sector within which relations with the largest principals will become strained. It is no secret that orders from the ailing Airbus could fall by 30%.
“Studies are stopped, investments frozen, it’s going to be hard for everyone”. sighs Christian Houel.

The measure
The support fund to investment and modernisation of industry aims to support industrial investment projects in 6 strategic sectors: aeronautics, automotive, nuclear, agri-food, health, electronics and essential industry inputs. 300 million of the fund is dedicated to aeronautics. They will enable the players in the sector to diversify, green and strengthen their production processes in order to develop their skills and prepare the green aircraft of the future.

The company
The company Aeva bought the former Meggitt factory in Fléac, European leader in helicopter turbine ignition systems, in April 2019. At the end of 2019, it was preparing an ambitious modernisation project to transform an ageing industrial estate into a “factory of the future 4.0”, and to recruit around 15 people. However, with the health and economic crisis, Aeva’s teams had to spend more time cancelling and reconfiguring orders than preparing new investments.

The Aeronautics Industry Support Fund allows the project to be re-launched: between now and 2023, the design office will be restructured and the factory will be modernised in order to develop the business and relocate the manufacture of components that were previously subcontracted to Asia. Aeva has already established a research and development team and is about to recruit specialists in certain materials, such as ceramics.

The testimony
“The modernisation of our factory is a great industrial adventure, and above all human. It will be piloted by our teams in Fléac, who know their product inside out to which we add new skills. The France Relance plan allows us to work on the products of the future and to participate in France’s industrial independence. (Christian Houel, chairman). ” (Christian Houel, chairman).

The new economy: an aeronautical company invests and hires in Charente

An aeronautical company from Fléac in the Charente, AEVA, will receive €1.4 million to help with research and development and job creation.

At Fléac, near Angoulême in Charente, AEVA manufactures ignition systems for helicopters and engines for military aircraft, such as the Rafale. Another production: emergency braking computers for Airbus. Or cockpit indicators for helicopters. With this state aid, AEVA will first of all move to a new location within a radius of 5 or 6 kilometres of Fléac. Some of the products manufactured by AEVA for the aeronautical industry

AEVA is going to invest 6 million euros to reindustrialise its activities and relocate to France. 40% of the company’s workforce are supervisors or engineers. This means that the research and development of materials for tomorrow is at the heart of AEVA’s activity, which will continue to hire.

If AEVA is doing so well, despite the health crisis, while the aeronautical sector has suffered greatly over the past year, it is thanks to its rather exclusive activities in its field. The Charente-based company is the only one to manufacture certain systems for aircraft engines or helicopters.